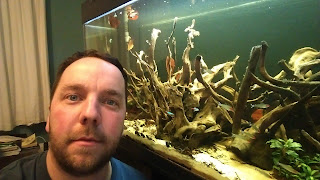 
James is the founder and admin of the Hampshire Aquascaping and Fish online community.

This week we have a new group member sharing there hobby with us. James has been an aquarist for 4 years which has all led to the current set up which he describes as a Blackwater South American tank. The original plan for this aquarium was to create a biotope of the fishes natural home however during researching this, it became apparent his choice of fish were to far apart geographically for this to be achieved so he decided that a south american theme would be the better option. 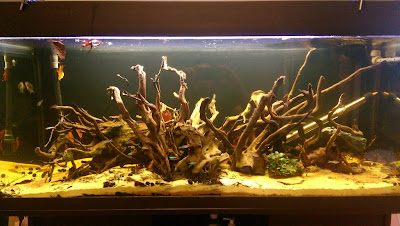 His Aquarium of choice is the Juwel Rio 240. Filtering the water James uses a Fluval 406 External filter. To achieve the lighting to suit his theme, James uses a Betta Products 14 watt LED bar. The aquarium did come with a custom light set up which consisted of quad LED 20 watt floodlight but He found these lights to be far to bright for the look he was aiming for.

As James aim was to create a south American theme, his choice of fish was no different.

When James was young, His dad was a fish keeper and James remembers a special fondness for his dads hatchet fish and khuli loaches. Even now, James still hold them in high regard. Another species James also finds the grumpy little faces of the bumblebee goby interesting and would not rule out having any of these fish in the future. 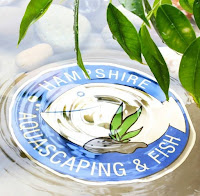 James has been running the Facebook group Hampshire Aquascaping and fish for over 12 months now and has found this to be very rewarding. He explains that his members have told him of many success stories. Helping people make the change from plastic plants to live plants would be his biggest achievement today. Although, this does take up a lot of his time each day, he would not change a thing.

Touch wood, James has not had any major set backs. However, he has never had any success keeping gouramis in the past which is a little frustrating.

Which a hobby with so many different factors to like and specialise in, we all have our own likes and dislikes. Some people enjoy the challenge of breeding, some like the tech side of things but James ( and i have to admit, i am the same) enjoys having a little bit of the natural world in his home. He enjoys making there environment as natural as possible and keeping them healthy and watching them go about there daily business. I personally like this aspect also, I find it very relaxing.

In the future, James hopes to build up a support network within his local community to allow his group to promote the hobby and offer support to newbies within the hobby. Recently They have set up a sister group to allow members to buy/sell/swap there fish or equipment locally.

I must admit that the set up James has at present is very much the same look I'm striving for in my own aquarium. That leaf litter is fantastic.

Finally,id like to thank James for shaming with us this week. If you would like to find out more about his set up, he can be contacted via his Facebook profile or his group Hampshire Aquascaping and fish.

Hope you all enjoyed reading MyTankMonday today. If you would like to feature next week, get in touch.