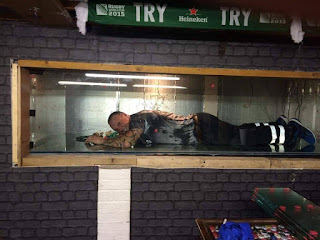 If your a member of Lothian Fishkeepers, you will have see one of our members updating us as he built a monster fish tank. I have been chatting to Scott Allison about his new tank and finding out just what was it takes to build a tank like that.

Like most of us, Scott got into fish keeping because of his dad and growing up around fishtanks. Starting of with swordtails in his bedroom at his parents house he always wanted something more. It was when he got his first home that he upgraded and started keeping Oscars and Paroon sharks. Soon after that it was Arowana and Red tail Catfish. The one thing that really got to Scott with keeping the big predator fish was when he had to move them on. So from a goldfish bowl to a 4ft then 5ft, 6ft, 7ft and finally his current 9ft tank. 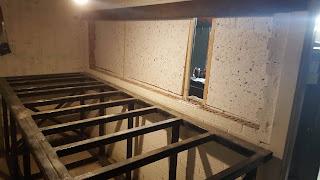 First of all the dimensions of this tank are 9ft Long x 3.5ft Wide and 2ft High with 12mm thick glass. It is truly a beast of a tank. In order for this tank to sit safely it required a steel stand with a 6 inches foam sheet, some plywood with a top layer of 20mm foam. 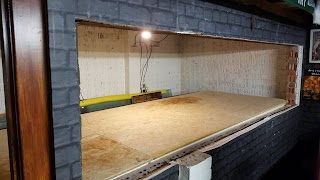 You cant but fishtanks this size in your local fish shop. This epic aquarium has been custom built by Scott and Stephen McInally who has experience building aquariums. For extra support, Scott opted to give it a double base with the top section being 12mm shorter on all four sides. It took four men to lift the base onto the stand!

After cleaning away the old silicone on went the four sides, held together with Soudal Marine Silicone. Allowing 24 hours to set, the braces were then put in place. A drill was needed next to drill a hole forth pipe to run to the sump tank which would sit underneath in the stand. The sump tank dimensions are 5ft x 2ft x 2ft. With this done, the weir was built around it.

Patience was needed here and Scott left the glass to set for two weeks. During that time he painted the back of the tank a matt black. The framework for the front of the tank was also attached and painted.

Sump tanks are excellent ways to offer filtration to a large tank. They offer a place for equipment like heaters to go. This reduces the equipment in your aquarium which allows you to have  better display with less clutter in the tank. Sumps also give you lots of options for media. The sump tank for Scotts tank was custom built again by himself and Stephen. This was done during the two weeks the main tank was setting. The sump consisted of five chambers.

The first section is for bioballs with a sock-style prefilter with pillow stuffing fibre around the inlet pipe. Second section holds the 2 500w heaters. The third section is 50 litre in volume and full of K1 Kindles media circulated by a large pond air pump. In the fourth part Scott will house the live food for the predator fish and in the fifth and final section the return pump sits here along with a back up heater (just incase). 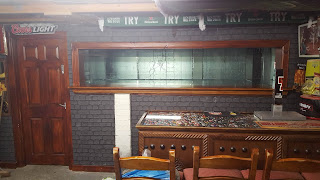 With the sump operating as it should it was now time to start filling the main tank. Scott was very nervous about this and took his time to make sure everything was holding as it should. The tank was filled a a pace of 10 inches per day to make sure it was settling ok on the new stand and foam base. 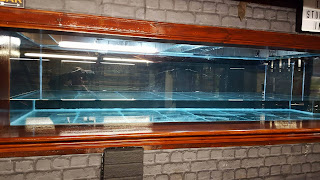 Once the tank was filled up, the return pump was plumbed into the tank, it was running and all was well. After a couple of days Scott added the gravel but admits he is not 100% on the look of it and may change it at a later date. Last to install was the two wave makers and then it would be time for his fish.

Scott has continued his love for the predator fish and his newly installed tank is home to the following fish. 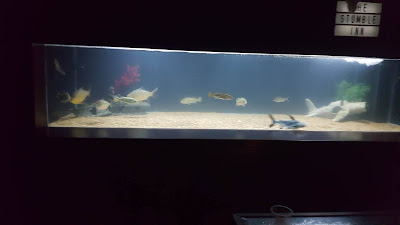 Scott has plans to add some Arowana and a Giant Gourami to the family. With this tank now running, The man cave has never looked better and on Saturday night, Scott had the boys round to give the new fish a warm welcome.

This is a special aquarium and there are not many this size in peoples homes. We should all look at this tank and agree that Scott has created something very special here. I have only included a small portion of the photos Scott has taken during the build. For the full collection, check out the photo tab in the Lothian Fishkeepers Facebook group.

I just have to say thank you to Scott for taking the time to answer my questions and for sharing his hobby with us.

Thanks for reading and remember, if you would like your tank to be featured like this, please get in touch.