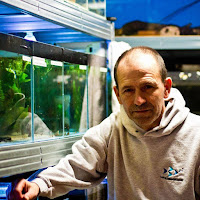 Lothian Fishkeepers has some very talented members. Fishkeepers that have achieved what many of us have ever wished for. Being able to boast a collection of rare, wild, and damn right stunning fish must be great. But running a shed with the kind of fish like Alex Carslaw, comes with a level of commitment that borderlines obsession. However Alex Carslaw has just what it takes and I was delighted when he agreed to answer some questions for the Lothian Fishkeeper Channel.

And this is what he said...

Firstly, for anyone that’s not familiar with you, can you introduce yourself?

Hello John, firstly, thank you for the opportunity to feature in your blog. As you will already know my names Alex Carslaw, I keep and breed mostly the Rainbowfish and Blue-eyes of Australasia. I operate from my custom-built fish house in my garden which houses 28 tanks ranging from 50 litres to 360 litres.

You have been in the hobby for over 30 years, how did it all begin?

The first ever tropical fish I saw was in my late uncles house when I was about 11 years old. A lovely tank full of Neon’s and Angelfish and as I had, like many other fish keepers, just been introduced to fishing I took a very keen interest in its progress. Shortly after that my uncle passed away and the upkeep of the tank was not an option. It wasn’t till I was 19 did I come across another, this belonged to my now wife. She ended up marrying me for my looks (obviously) and I married her for her fish tank, Lol. My wife’s family owned a little pet shop next the barras in Glasgow’s gallowgate called Sandy’s pets so I now had access to hundreds of species I had only ever seen in a book and was well and truly hooked.

Could you describe your current stockist?

I currently house 16 species of Rainbowfish and 3 species of Blue-eyes as well as other family’s such as Killifish, Catfish, Barbs, Rasboras, Bettas, the list is endless as I often forget what I keep!

You have some very interesting species but its rainbowfish that your known for worldwide. When did your love begin for these often-overlooked tropical fish?

It all began when I first set my eyes upon the iconic Melanotaenia boesemani. I was working for a Glasgow Importer of tropical fish at the time. I think I spent my week’s wages on them! Next Rainbowfish I obtained was the Red Rainbowfish, Glossolepis Incisus which was the first one I bred. To date I have now bred 42 species.

You are doing some very important work to help preserve these species in the wild. With more and more of the natural habitats being reduced, what can the average fish keeper do to help?

We are seeing more and more new species becoming available. New access roads are being built in West Papua and making the discovery of these beauty’s easier but this comes at a price, the roads are being built for the de-forestation of the once pristine tropical rain forests and in their place, are massive oil palm plantations. Obtaining these new species and breeding them is the only hope of preserving them as the habitat they once lived in will be destroyed. The Island of West Papua and Papua New Guinea are probably the richest in the world for minerals and as such are subject to massive mining operations, both legal and Illegal with both having a crippling effect on the waterways. Sadly, foreign journalists are banned from West Papua by the Indonesian government as an Island dies screaming and no-one can hear it.
Being a relatively young family of fishes, in evolutionary terms, Rainbowfish can be easily hybridised between closely related species so it pays to source your fish from a reliable source to ensure you have true species. There are a few stores that work closely with the guys at Rainbowfish UK as well as the International Rainbowfish Group (IRG) which ensures new and correctly identified species can be maintained and spread throughout our network.
If you require any further information on obtaining true species or would like to join up at Rainbowfish UK don’t hesitate to contact myself or look for us on Facebook.

With so many successful breeding projects behind you, you should be proud but is there one species that your especially proud to be able to say you bred?

In all honesty, I am proud of every fish I have bred, not just Rainbowfish. I take a lot of satisfaction when people come to me to obtain some of my home bred stock. It gives me a chance to give advice on the correct procedures for maintaining the species and is an excuse for a good natter, something I’m good at!

If I had to pick one out it would probably be the Chocolate Gourami, it was one of the first non-Rainbowfish I bred back in the 80’s. There was no Internet and advice was practically non-existent on the subject so I was proud to manage to achieve it. No digital cameras existed but we did manage some photos and had slides made, which we presented at our local club. I have no clue what happened to them so that’s kind of disappointing.

Without doubt, if I was a retailer, I would have a display tank full of mature specimens, arranged to show them off to their best potential. Usually when I have visitors they are quick to comment when they see the big Rainbowfish in my display tank in the fish house. The key to getting them to show off is security and highly oxygenated clean water, make them feel secure and they will show their best.

RainbowfishUK is a vital databank for any rainbow fish keeper. What gave you the idea to set these up and do you think social media has played a part in the promoting of rainbow fish care?

We are lucky to have some fantastic photographers at Rainbowfish UK so the site is not set up as an advice site but more of a data bank of images where people can get help in Identifying what species they may have as well as some basic information on each species. We would always advise people to download the brilliant Adrian Tappin’s free eBook, his lifetimes work with Rainbowfishes which he decided to make available free to everyone. The link is at the bottom of this blog.
Social media has played a massive part in bringing Rainbowfish keepers together worldwide, creating a network easily accessed like never before.

Having been in the hobby for over 30 years, you must have met a lot of fish keepers. has there been anyone that you would say has influenced you throughout?

Through my work with Rainbowfishes I’m lucky to get invited to conventions and clubs to share my experiences. Earlier on in the year I was invited over to the Netherlands to speak at the IRG convention where I met a lot of people I have only ever spoken to online. One of my fellow speakers was a guy called Marten Luter Salossa from West Papua. Marten does some fantastic work highlighting the critical danger that faces Melanotaenia boesemani in its habitat, it was an honour and a privilege to spend time with him. In the Rainbowfish world, another two guys that stand out are Gary Lange and Johannes Graf and I spent my Saturday night with both them and Marten planning this year’s collecting trip to West Papua, for a Rainbowfish geek like myself, it was heaven! 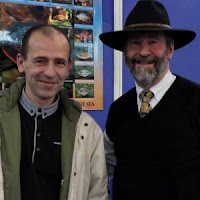 If I had to pick someone out though it would have to be Heiko Bleher. A major influence to myself and my fish and a good friend as well.

More exciting news will be revealed soon about Heiko so stay tuned!

Your shed is well known and one that has housed some very nice fish in its time. at this moment, which tank are you spending most of your time looking at?

Probably my tank of exclamation barb fry. It’s a fish not often been bred and I’m excited to watch the progress!


I have to say thanks again to Alex for sharing his thoughts with us and I hope to see loads more from Alex in the future. Anyone that has ever picked up some fish from Alex will know that not only do you get a very high quality bred fish, you walk away with a full understanding of how to care for that fish and even breed them too. Keep up the good work Alex and I personally am looking forward to seeing your progress on the exclamation fish you mentioned.

For anyone in the central Scotland area this evening, Alex is giving doing a talk for the Kirkcaldy Aquatic Society. He will be focussing mainly on Blue eyes and everyone is welcome, including non-members.

Thanks for reading guys.