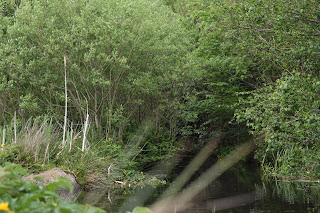 Springtime always brings along lots of things to do outside. Our local pond is always busy during spring with lots of ducklings and signets bobbing about. Trees are blooming and plants are popping up all over the place. It really is my favourite time of the year.

This year I really wanted to take advantage of the spring season and enjoy some time with the kids down at the pond. We decided to try and recreate an area of the pond - in a home aquarium.

Our local pond is populated is home to a woodpecker, kingfisher, crane, swans, ducks, squirrels and all the other woodlice creature. Under the surface of the water, you will find lots of equally as interesting things. This is what we done.

So Myself plus my two daughters, Anna (aged 3) & Ava (aged 8) set of on our mission to bring the pond into our home. After walking around the large pond and following the stream down to the smaller pond, we eventually picked the perfect spot. It was easy to get into the water and had lots of fish swimming around.

The exact coordinates of our chosen spot were 55°55.844'N -03°30.247'W which is known locally as the small lanthorn pond or lower Dedridge pond. This is where the stream flows into the pond area and was only about 30cm deep with a slow flow of water.

Initially, I wanted to look closely at the substrate in order to recreate this at home. Looking closely I noticed that the bottom of the stream/pond was covered in smooth rounded black pebbles. Amongst the pebbles was a heavy leaf litter which has fallen from the trees directly above the water. This included Oak and Birch leaves. I also noted some fallen branches and algae growing on some of the pebbles and branches.

Looking even closer, I found small Gammarus pulex and tiny leaches living underneath the stones. The Gammarus in particular  are a great food source for the predatory Three-Spinned Stickleback we hoped to catch and study.

Collecting several different sizes of stones plus a piece of wood and leaf litter from the surrounding area would hopefully off any fish collected a similar environment in the aquarium.

After collecting some invertebrates and stones, wood and leaves, we set to work catching fish. This was the part my two daughters were really looking forward to and who could blame them. I was actually telling them to get into the water instead of the usual warnings to stay away from the water. 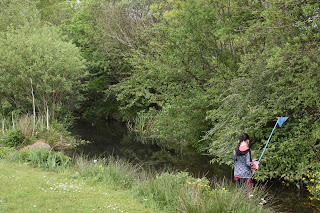 I spent most of my childhood in and around the local pond and watching my daughters dipping their nets into the water reminded me of how much fun it could be. Ava was quick to go chasing the shoals of fish shooting past her while I was sticking to the sides. By shoving my net underneath the bank, I was finding plenty small stickleback females. This was perfect. I was delighted to find a large male stickleback in the net too. His amazing red breast and neon blue eyes are unmistakable. 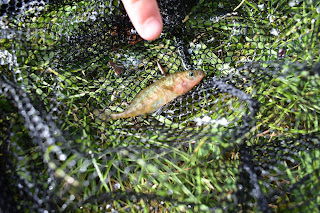 Ava was catching things too but for some reason, she was only able to catch chubby tadpoles. As we were setting up a smaller aquarium, we released these back to the water after having a close look at them and discussing the different stages tadpoles go through before becoming adults. Again, this took me back to being a boy and remembering the excitement of discovering frog spawn in the pond. 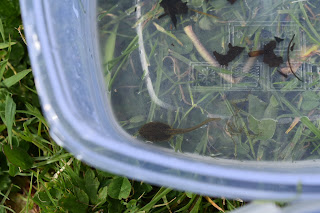 We collected about 4 females and one large male fish (Gasterosteus aculeatus) in total. Alongside the fish, We were able to collect several bladder snails, a really nice rams horn snail, a few Gammarus, some little tiny leaches and a water beetle (Coleoptera)
Looking around the pond there are a wide variety of plants, mosses and wild flowers. However none of which originated from the water so we didn't take any for our project. Its worth noting that the area we were studying didn't have any plants growing in the water and only one type of green filamentous algae which was attached to several rocks that were collected.

Finally, we gathered up some of the finer substrate to add to the black soil we had at home. we decided on black soil because it is as close to the black rocks and gravel as we could get. I didn't want to remove too much of the substrate from the stream because the cleaning process would have killed any living organisms. Will all this packed up, We made out way back home to begin our Scottish Stream Biotope Aquarium.
Once back home, We spent some time checking out our interesting finds up close. The kids especially liked the ramshorn snail with its swirly shell. Ive kept golden rams horn snails in my other aquariums before but the one we caught was larger and had a solid black shell.

With the aquarium in place, I added the black soil then began setting out the black stones we collected followed by the branch. I then added the moss and covered in oak leaves that found around the pond.

The easiest way to fill the aquarium with water was to cover the entire layout using a plastic bag. By doing this the mucky substrate was not disturbed a great deal. Once the water is in the bag can easily be removed.

With a setup like this, The water temperature I was aiming for was round about 18° so no heater was added. The room temperature rarely goes passed 20° which shouldn't present any issues.

For filtration I went with my small Hydor internal filter which would sit in the corner of the tank. This would blend into the background.

With all the live stock currently being held in buckets and tubs in my garden ( in the shade) I wanted this tank to be ready asap. I added three products which would trap ammonia, establish a healthy biological filter and provide all the trace elements to make these wild caught fish feel as close to nature as possible.


As soon as the the water reached the right temperature, we began adding the fish. Starting with the smaller females one by one they swam down to the leaf litter and began exploring their new home. Next we added the snails. My Daughter really enjoyed this part (she has a thing for collecting snails from our garden). Finally we added our little monster. Watching the big male dart about exploring his new surroundings and displaying this nasty spikes on his back was great. Having only ever really kept tropical or marine fish, it was fascinating to watch this mean looking fish settle in.

Our Sticklebacks are not used to prepared fish food so I was a little concerned about what to feed them. initially we fed them frozen bloodworm with success. We also offered frozen gammarus which was a big hit. however many of the gammarus were too big to be eaten by the rest of the fish. They enjoy most frozen foods, both meaty and vegetable foods are enjoyed. Recently I have introduced an insect meal based dry food granule which to begin with was rejected but now will bee eaten by all the fish.

In this video you can see the male building his nest by selecting various bits of moss other plant matter lying around. He glues this together by secreting a protein based liquid from his kidney. He is very selective over which materials to use and will often remove pieces to replace them. Once his nest is complete, he will trap a female inside and they will spawn. He will chase the female away and take full responsibility over the care of the eggs and eventually the fry will emerge free swimming.

I have yet to see a successful spawning. However this doesn't rule out the fact it may have taken place. We watch our fish daily and eagerly await some baby sticklebacks.

Our native Scottish stream biotope was an idea my daughter Ava came up with. She is very much an outdoor girl and spends every day playing down at the pond an the surrounding woodlands. Ava doesn't have a great interest in my other aquariums so when she came to me with this idea, I was delighted. It has been great talking to Ava about the different things we found and spending time doing what I used to do as a boy. It brought back so many happy memories. I urge you all to do something like this with your kids. You won't regret it.

The lifespan of these fish is normally around 2 years so I do intend on maintaining this biotope and hope to follow through with the spawning cycle to fully grown adult fish. I think this would be really educational for my daughter.

I will do a follow up blog and hope to have lots of photos of fry to share with everyone.

Thanks for reading and I hope ive inspired you to get down to your local stream with your kids to see what you can find.